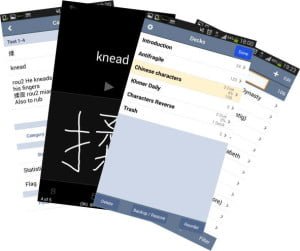 Recently, a reader recommended Flashcards Deluxe to me, a spaced review software for iOS and Android. He was looking for an app that could also be used on a Kindle Fire and settled on this program. Being myself an avid user of flashcard software, I decided to get the version for Android and take it for a spin. I tested it over a period of three weeks and reviewed it using a specific set of criteria. I decided to use Flashcards Deluxe for two specific purposes:

In this post, you will read more about use case 1 since it calls for the creation of more complex flashcards, that is, three-sided flashcards containing English text, Chinese characters, images for some obscure characters and components, and sound. Everything stated should, however, be transferable.

Read moreTaking Flashcards Deluxe for a Spin: A Brief Review 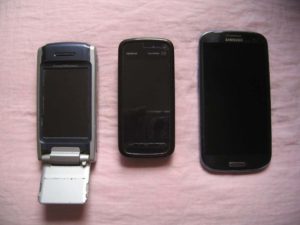 This year, in early August, I made the transition to a Samsung Galaxy S III, my first Android smartphone. In the future, you can expect to see several blog posts on how I am (hopefully) making my Galaxy into a productive powerhouse. The first post is already out. After all, without integrating it into one’s personal information management, any smartphone is just an expensive toy.

For me, this is the perfect time to look back at my personal smartphone history.

It started in June 2004 at Hong Kong’s international airport with a Sony Ericsson P900 (the smartphone on the left in the picture). 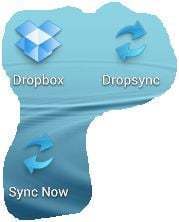 With many people now owning a PC, a tablet, and a smartphone, Dropbox has become a very popular service to keep files in sync. You place your files, folders and subfolders in your PC’s Dropbox folder, and they should in principle be available in the cloud and on every other device with an installed Dropbox app.

Unfortunately, unlike the Windows app, Dropbox for Android phones and tablets doesn’t quite work this way. Only files you have marked as “Favorites” are downloaded to your local tablet or smartphone and thus available offline. All other files in your Android’s Dropbox are only accessible if you have a network connection, so for example not on a plane, not when you are on an expensive mobile network in a foreign country, and so on. What’s more, you can only mark files, not complete folders as favorites, and if a particular program doesn’t directly support Dropbox, you are out of luck as well. In a nutshell, Dropbox on Android is missing the sync.

As you can imagine, I was quite disappointed when I tried to sync my first Android phone. Are we in the 21st century, or what?

What I needed and wanted, was a real sync: